Peter Doherty & The Puta Madres' Performance Is Delightfully Messy, Intimate And As Real As

The Puta Madres is Peter Doherty's latest band to join the big Albion family. Yet some faces are already familiar: Babyshambles' bassist Drew McConnell for instance, as well as the brand new recruit, Jack Jones from Trampolene. Jones was already The Libertines’s tour poet last year, and was recently invited to be part of The Puta Madres as a guitarist, and Doherty's new sidekick. The Libertines co-frontman has just released his first solo album in 7 years called Hamburg Demon

After a well acclaimed tour with the Libertines, Peter Doherty kicked off his solo Eudaimonia Tour in Bristol over a week ago. To do so, he gathered a great bunch a musician from very different horizons. Drew McConnell who's been playing bass with Babyshambles for over a decade, violinist Miki Beavis who has be accompanying Doherty on his solo shows for a couple of years, film-maker Katia De Vidas who plays keyboards, as well as two new recruits; Rafa on drums, and Stefany Ka

For the launch of the new album A Guide For The Perplexed, Drew McConnell's Helsinki chose the iconic 100 Club, which has previously hosted a fair amount of legends such as The Kinks, The Clash or The Rolling Stones. The venue being very wide with hardly no depth, means the furthest you can be from the stage is about 5 metres, which is a guaranty for a very intimate show. The band - including Patrick Walden on the guitar and Babyshambles' drummer Adam Falkner - opened the gig

Helsinki is commonly known as the capital of Finland, but it will soon be more famous as Drew McConnell's collective. Since he started this side-project, Babyshambles' bassist has been collaborating with different artists including Peter Doherty and Albert Hammond Jr from The Strokes. After Coast OF Silence, Helsinki will be releasing their new album A Guide For The Perplexed, on the 2nd of march 2015. They will also launch the record at the 100 Club on the same day; but in t

Due to the very high demand, Peter Doherty was scheduled to play two gigs in one night on the 22nd of February. The 1st show was set to start at 7:30pm, and an hour earlier the crowd was already pilling up in front of the doors. After a long wait and multiple calls from an impatient fans singing Babyshambles' ska/reggae tune "I Wish"; Doherty finally appeared on stage at 8:15pm with violinist Miki Beavis, as well as Drew McConnell and Adam Falkner, Babyshambles' bassist and d 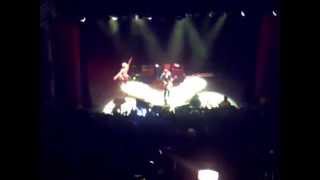 At some point in his carrier, it was common knowledge that Peter Doherty found it hard to show up at his own gigs, often leaving fans bitter and disappointed. However, when he does turn up, Doherty surely knows how to entertain a crowd, and he puts a lot of passion into it. The ex-Libertine managed to please a sold out Shepherds' Bush Empire, performing for almost an hour and a half on his own. He played over 20 songs including 6 by the Babyshambles, 4 songs from his last sol